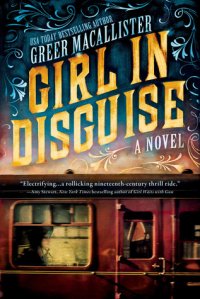 For the first female Pinkerton detective, respect is hard to come by. Danger, however, is not.

In the tumultuous years of the Civil War, the streets of Chicago offer a woman mostly danger and ruin-unless that woman is Kate Warne, the first female Pinkerton detective and a desperate widow with a knack for manipulation.

Descending into undercover operations, Kate is able to infiltrate the seedy side of the city in ways her fellow detectives can’t. She’s a seductress, an exotic foreign medium, or a rich train passenger, all depending on the day and the robber, thief, or murderer she’s been assigned to nab.

Inspired by the real story of Kate Warne, this spirited novel follows the detective’s rise during one of the nation’s greatest times of crisis, bringing to life a fiercely independent woman whose forgotten triumphs helped sway the fate of the country.

Kate Warne finds an ad in the newspaper from the Pinkerton National Detective Agency looking to hire a new detective.  Kate jumps at the opportunity, but Allen Pinkerton is reluctant to hire her. She convinces him that being a women would be an asset for his agency rather than a liability.

Kate says, “Sir, here is the crux of it. Women can go places men are not welcome. They can win the trust of other women, the wives and companions to whom the criminals have confided their crimes. They can travel in genteel circles to insinuate  themselves with seeming gentleman. I’m certain the men who work for you have many talents, but there is one thing none of them can do: be a women.”

I love that Greer Macallister has used a real person to build her story around. Kate Warne really existed and was the first female detective hired, at the Pinkerton Agency. I really enjoyed reading about the many real-life events that Kate was actually involved in while working at the agency. While reading the first several chapters of the book, I felt like I was watching an old movie from the earlier 1900’s. After a while I felt like the story dragged a little and got a bit redundant, but by the time I reached the halfway point things started to really pick up. I became completely immersed in the second half and couldn’t read fast enough to find out what happens.

I had never heard of Kate Warne, and according to Greer Macallister much about her is unknown, but what is known is quite amazing. She even played a key role in history, while working undercover, to try and protect a US president. You’ll just have to read the book to find out more about that!

Thank you NetGalley, Sourcebooks Landmark, and Greer Macallister for an opportunity to read and give my honest opinion about this book.

6 thoughts on “Book Review – Girl in Disguise by Greer Macallister”