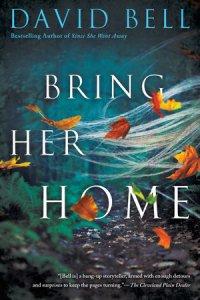 Just a year and a half after the tragic death of his wife, Bill Price’s fifteen-year-old daughter, Summer, and her best friend, Haley, disappear. Days later, the girls are found in a city park. Haley is dead at the scene, while Summer is left beaten beyond recognition and clinging to life.

As Bill holds vigil over Summer’s bandaged body, the only sound the unconscious girl can make is one cryptic and chilling word: No. And the more time Bill spends with Summer, the more he wonders what happened to her. Or if the injured girl in the hospital bed is really his daughter at all.

When troubling new questions about Summer’s life surface, Bill is not prepared for the aftershocks. He’ll soon discover that both the living and the dead have secrets. And that searching for the truth will tear open old wounds that pierce straight to the heart of his family

The book opens with Bill arriving at the hospital. He has gotten word that his daughter, Summer, has been found and is in critical condition. He also finds out her best friend Haley, who Summer was with the day she went missing, did not survive her injuries. The two girls, one beaten to death, the other beaten beyond recognition!

From the first chapter this book grabbed my attention and didn’t let go. Bill is a man on the edge. He has a very bad temper, is high strung, and is an extremely intense person. I could literally feel his tension, anger, and urgency to find out who did this to his daughter. He’s a single dad raising a teenage daughter. He’s doing the best he can, but realizes he doesn’t really know what’s going on with his daughter as much as he thought he did.

This story goes much deeper than “what happened to Summer.” Bill’s sister, Paige, comes to town as soon as she learns Summer has been found. We learn that Bill had a very bad temper even as a kid, and his relationship with Paige, on some level, is strained. Bill’s wife Julia passed away just a year-and-a-half earlier and when Summer turns up so badly injured those emotional wounds are reopened. There is lots of healing to do, but nothing can be fixed until the person, or persons, who hurt his daughter are found.

This was a fun story with a couple of unexpected twists. This is my first book by David Bell and I was impressed how he was able keep his cards hidden as well as he did for most of the book. I couldn’t truly piece it all together until the end.

Thank you NetGalley, Berkley, and David Bell for an opportunity to read and give my honest opinion about this book.

15 thoughts on “Book Review – Bring Her Home by David Bell”