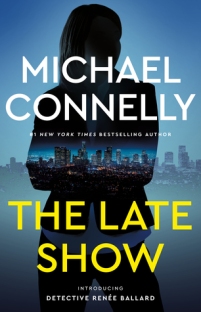 Renée Ballard works the night shift in Hollywood, beginning many investigations but finishing none as each morning she turns her cases over to day shift detectives. A once up-and-coming detective, she’s been given this beat as punishment after filing a sexual harassment complaint against a supervisor.

But one night she catches two cases she doesn’t want to part with: the brutal beating of a prostitute left for dead in a parking lot and the killing of a young woman in a nightclub shooting. Ballard is determined not to give up at dawn. Against orders and her own partner’s wishes, she works both cases by day while maintaining her shift by night. As the cases entwine they pull her closer to her own demons and the reason she won’t give up her job no matter what the department throws at her.

I’m a huge Michael Connelly fan and have read every book to date! Imagine my excitement and surprise when his next book was announced and it is book one of a brand new series, with a female lead no less.

Renée Ballard and John Jenkins have been partners on the late show for the past two years. The late show is the overnight shift and they move from case to case throughout the night. They go to any scene where a detective is needed to take initial reports, but they don’t keep any of the cases. Every case gets turned over to the appropriate investigative units in the morning.

Renée likes her job and her partner, but she is itching to get involved in a case, to take a case from start to finish. She gets permission to work on one of the cases that she had been called out to while on the late show. Working this case has reenergized her and when things start to come together during her investigation she realizes she has been missing the investigation process more than she realized.

It was the Holy Grail of detective work. It had nothing to do with evidence or legal procedure or probable cause. It was just knowing it in your gut. Nothing in her life beat it. It had been a long time coming to her on the late show but now she felt it and she knew deep down it was the reason she would never quit, no matter where they put her or what they said about her.

Renée is smart, persistent, and a real go-getter. Nothing will hold her back – not being told to back-off a case or even when she is in physical danger.

I loved the way Michael Connelly intricately wove this mystery together. There were a lot of characters and many moving parts, but in the end it all fell into place. It was also very clever of him to work his own Amazon series, Bosch, into the book. Well done!

I think it will be fun to see where this series goes. There is a lot to explore outside of investigating cases. Renée’s dad passed away when she was very young and her mom was basically out of the picture, so she was raised by her grandmother. I also think the sexual harassment complaint she filed in the past against Robert Olivas could make for an interesting storyline should Michael Connelly decide to dive deeper into that.

If you have never read a Michael Connelly book this would be an excellent place to start!

Thank you NetGalley, Little, Brown and Company, and Michael Connelly for the opportunity to read and review this book for my honest opinion.

Do you have favorite Michael Connelly book and/or series?

5 thoughts on “Book Review – The Late Show by Michael Connelly”