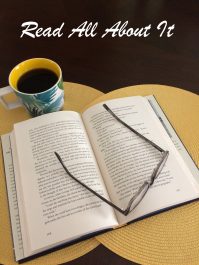 Welcome to…
Read All About It – Look Who Has A New Book Coming Out!

I am always on the hunt for new books that I “must read” and new releases by my favorite authors. Rather than keeping these books all to myself I decided to make a blog post to share the good news with you.

I don’t have a set day or time of month that I will make this post. As I find books to share with you, thanks in part to my author tracking web sites, I will make a post.

Amos Decker and his journalist friend Alex Jamison are visiting the home of Alex’s sister in Barronville, a small town in western Pennsylvania that has been hit hard economically. When Decker is out on the rear deck of the house talking with Alex’s niece, a precocious eight-year-old, he notices flickering lights and then a spark of flame in the window of the house across the way. When he goes to investigate he finds two dead bodies inside and it’s not clear how either man died. But this is only the tip of the iceberg. There’s something going on in Barronville that might be the canary in the coal mine for the rest of the country.
Faced with a stonewalling local police force, and roadblocks put up by unseen forces, Decker and Jamison must pull out all the stops to solve the case. And even Decker’s infallible memory may not be enough to save them. 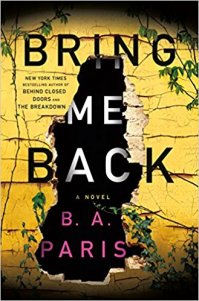 Bring Me Back by B.A. Paris

I read The Breakdown over the summer as my Hawaii beach read and loved how easy it was to jump in and out of. Behind Closed Doors is patiently waiting for me on my bookshelf.

A young British couple are driving through France on holiday when they stop for gas. He runs in to pay, she stays in the car. When he returns her car door has been left open, but she’s not inside. No one ever sees her again.

Ten years later he’s engaged to be married; he’s happy, and his past is only a tiny part his life now. Until he comes home from work and finds his new wife-to-be is sitting on their sofa. She’s turning something over in her fingers, holding it up to the light. Something that would have no worth to anyone else, something only he and she would know about, because his wife is the sister of his missing first love.

As more and more questions are raised, their marriage becomes strained. Has his first love somehow come back to him after all this time? Or is the person who took her playing games with his mind? 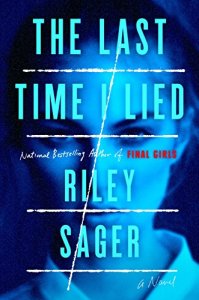 The Last Time I Lied by Riley Sager

Whether you loved it or not, I think it’s fair to say that Final Girls was one of the most talked about books of the summer. It looks like Riley Sager is looking for another exciting summer release with The Last Time I Lied.

Two Truths and a Lie. The girls played it all the time in their tiny cabin at Camp Nightingale. Vivian, Natalie, Allison, and first-time camper Emma Davis, the youngest of the group. The games ended when Emma sleepily watched the others sneak out of the cabin in the dead of night. The last she–or anyone–saw of them was Vivian closing the cabin door behind her, hushing Emma with a finger pressed to her lips.

Now a rising star in the New York art scene, Emma turns her past into paintings–massive canvases filled with dark leaves and gnarled branches that cover ghostly shapes in white dresses. The paintings catch the attention of Francesca Harris-White, the socialite and wealthy owner of Camp Nightingale. When Francesca implores her to return to the newly reopened camp as a painting instructor, Emma sees an opportunity to try to find out what really happened to her friends.

Yet it’s immediately clear that all is not right at Camp Nightingale. Already haunted by memories from fifteen years ago, Emma discovers a security camera pointed directly at her cabin, mounting mistrust from Francesca and, most disturbing of all, cryptic clues Vivian left behind about the camp’s twisted origins. As she digs deeper, Emma finds herself sorting through lies from the past while facing threats from both man and nature in the present. And the closer she gets to the truth about Camp Nightingale, the more she realizes it may come at a deadly price.

Will you be reading any of these?

14 thoughts on “Read All About It – Look Who Has A New Book Coming Out!”