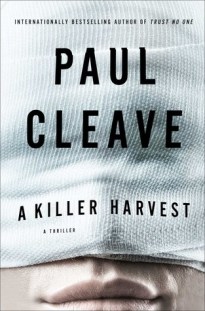 Joshua is convinced there is a family curse. It’s taken away his biological parents, robbed him of his eyesight, and is the reason his father Logan, the detective who raised him, is killed while investigating the homicide of a young woman. The suspect, Simon Bowers, is killed by Logan’s partner Ben, whose intentions are murkier than expected.

After this tragedy Joshua is handed an opportunity he can’t refuse: a new pair of eyes. But a mishap during the surgery leads to Joshua unknowingly getting one eye from his father, and the other from Simon. As Joshua navigates a world of sight, he gets glimpses of what his eyes might have witnessed in their previous life. Memories, truths, and lies Joshua discovers a world darker than the one he has emerged from. What else has he failed to see?

Meanwhile, Simon’s accomplice Vincent is bent on revenge, going after the loved ones of those involved in Simon’s death and Vincent is drawing closer and closer to Joshua.

When I saw the cover of this book, I judged it and assumed it would be a very dark, heavy, creepy book. I was pleasantly surprised that it was not nearly as dark of a story as I had assumed it would be. Now don’t get me wrong, this is definitely a mystery/thriller, with many secrets to be revealed. It is dark at times and not for the faint of heart, but there is a lot more to this story than I had assumed there would be.

Joshua Logan is a high school student at Canterbury School for the blind and he is convinced that he is cursed! Even when something good happens to him, he has no doubt that it will eventually turn bad.  The story opens with the death of his father, who has just been killed and is giving his son the gift of a lifetime, his eyes.

This book revolves around the notion of cellular memory, the idea that donated organs can hold memories of the person that has died and be passed onto the recipient of the organ. I found this to be a very unique and interesting jumping off point in which to form a story around.

I was surprised, in a good way, by how much of this book was about Josh and his new eyes. We get a glimpse into what it would be like to go from being blind to seeing the world for the first time. It is a lot to take in for Joshua who is still mourning the passing of his father and yet he has this beautiful gift from him to explore the world with.

I love when an author can shock me and make me laugh out loud – there was one situation that occurred and my first reaction was, ewww and then found myself laughing. I read this part out loud to my husband and I think I found it a lot more amusing than he did. I guess my mind is just a little more twisted than his is.

I really enjoyed the way this book continuously shifted perspective, it kept me on my toes and taught me not to get too comfortable with where I thought the story was headed.

I am thrilled to have picked up my first Paul Cleave book and cannot wait to read more!

Do you have a favorite Paul Cleave recommendation?

14 thoughts on “Book Review – A Killer Harvest by Paul Cleave”