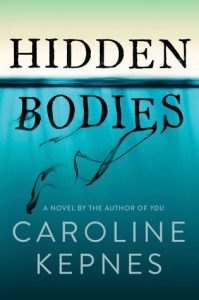 Joe Goldberg is no stranger to hiding bodies. In the past ten years, this thirty-something has buried four of them, collateral damage in his quest for love. Now he’s heading west to Los Angeles, the city of second chances, determined to put his past behind him.

In Hollywood, Joe blends in effortlessly with the other young upstarts. He eats guac, works in a bookstore, and flirts with a journalist neighbor. But while others seem fixated on their own reflections, Joe can’t stop looking over his shoulder. The problem with hidden bodies is that they don’t always stay that way. They re-emerge, like dark thoughts, multiplying and threatening to destroy what Joe wants most: true love. And when he finds it in a darkened room in Soho House, he’s more desperate than ever to keep his secrets buried. He doesn’t want to hurt his new girlfriend—he wants to be with her forever. But if she ever finds out what he’s done, he may not have a choice.

This is a review for the audio version of Hidden Bodies. Just as with book one, You, the narration is fantastic! Both books in this series are narrated by Santino Fontana. He brings this book to life and completely immerses you in the story. If you would like to read either of these books in this series I highly recommend you give the audiobook a try!

Hidden Bodies picks up right where book one left off. Joe has fallen in love and knows he is in the perfect relationship. Unfortunately she does not feel the same and breaks his heart. Without thinking twice he is off to Hollywood, all in the name of revenge!

Joe, Joe, Joe…when will he learn! He is just as creepy as ever and is seriously insecure. I fear for anyone who gets in his way because he will stop at nothing to get what he wants and feels he deserves.

For this book I give the narration 5 stars, but for the storyline itself I am rating the book a 3.5. It was good, but it didn’t knock my socks off like the first one did. However, I am a fan and REALLY hope that Caroline Kepnes will continue this series because I really want to know what will happen next!

*Other Caroline Kepnes Books I Have Reviewed: