I loved the first two books in this series so, when I had the opportunity to join the blog tour it was a no brainer! Many thanks to Tracy Fenton at Compulsive Readers for the invite and Trapeze for my review copy via NetGalley.

A locked room. A dead body. A secret that went to the grave.

When retired police officer Finlay Shaw is found dead in a locked room, everyone thinks it’s suicide. But disgraced detective William ‘Wolf’ Fawkes isn’t so sure.

Together with his former partner Detective Emily Baxter and private detective Edmunds, Wolf’s team begin to dig into Shaw’s early days on the beat. Was Shaw as innocent as he seemed? Or is there more to his past than he’d ever let on?

But not everyone wants Wolf back – and as his investigation draws him ever deeper into police corruption, it will not only be his career on the line – but the lives of those he holds closest as well.

Wolf is back!! At last William Fawkes (Wolf) and Chief Inspector Emily Baxter are back together, making waves, and working together to solve a mystery that is too close to home.

Detective Sergeant Finlay Shaw has recently retired and is found dead, alone in a locked room. Is it suicide as it appears or could it be murder? We have, what I like to call, the fab five coming together to investigate the death of their friend Finlay – Wolf, Baxter, Christian, Saunders, and Edmunds. They have a puzzle that appears to be solved, but upon closer inspection they see that some of the pieces might not fit quite as well as they first appeared.

In my opinion this book has a much different vibe than the previous two in the series. Ragdoll and Hangman were fast-paced race-against-time mystery/thrillers. I feel that Endgame is not quite as intense and is more of a mystery, police procedural. Don’t get me wrong, that doesn’t mean that it isn’t every bit as good, it was just different from what I have come to expect.

Let’s talk humor. I love Daniel Cole’s use of humor, especially from Wolf’s character. Oh my goodness, he is quite the character! The pictures that appeared about halfway through the book were hysterical. I even got a few odd looks from hubby and had to show them to him to share in my enjoyment. This humor is a common thread that has run throughout all the books in this series, but Endgame is a step above the first two. I really hope he continues to incorporate it in his writing style.

I loved the way this book picked right back up where Hangman left off. I would highly recommend these books be read in order, the character development is imperative for optimal enjoyment!

*Endgame is available for purchase at these fine retailers –

*Other Daniel Cole books I have reviewed – 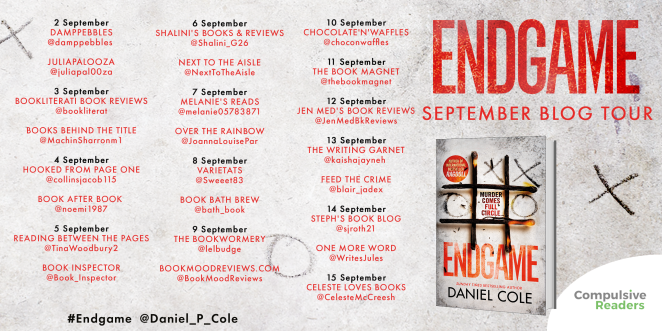