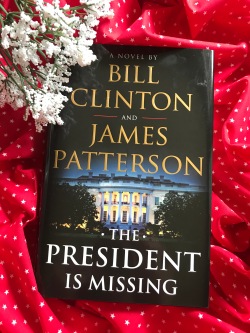 Hubby and I are back to share our thoughts on the latest book that we read together. We did not discuss the book prior to writing our answers so that we would not taint each other’s opinion.

This month it was hubby’s pick and he chose a book that we had both been wanting to read and was collecting dust on our bookshelf – The President Is Missing by Bill Clinton and James Patterson.

**Warning – this review will contain spoilers.**

1. The book is written by ex President Bill Clinton. Did this add to your expectation/excitement when setting out to read the book?

Yes, it did! Hubby and I attended Book Con a couple of years ago and saw James Patterson and Bill Clinton give a keynote and talk about this book. We were really excited to hear how they collaborated and to learn a bit more about them on a personal level. One of the most interesting things we learned was that they bounced ideas off of each other the old fashion way – the post office. In this day of modern technology, we were really surprised to learn this!

Definitely. There are many books involving a president, but this intrigued me because I thought we would learn some things from someone who has lived the life. I had only read one James Patterson book prior to this (The Black Book) and I had enjoyed it, so I hoped that working with Clinton would be successful.

2. Can you tell the book is written by two people? Do the chapters tend to differ in style?

I could not tell there were two authors, I thought the writing was seamless. It made me wonder how much writing Bill Clinton actually did. I couldn’t help to wonder if he contributed more to the inner workings of the white house and the job of the president than the story itself.

I would say no, it feels like one consistent voice and that is hard for two authors to do. My hunch is that Patterson did most of the writing and Clinton used his experience to add background information.

3. The President is at pains to explain why each member of his team is deserving and loyal yet doesn’t give us a reason why Carolyn has been removed from the list of possible traitors. Did this, in your eyes, make her suspect number one? At what point did you guess it was Carolyn?

It did seem a bit obvious, pretty early on, that Carolyn would be the white house snitch. She was never on his radar so it was a bit of a giveaway. Why was she his ally, but no one else was to be trusted? It made no sense to me.

I completely eliminated Carolyn from any suspicion. (One thing that comes from reading primarily non-fiction is that I tend to take things at face value.) I guess I figured that she had lost her opportunity for being the bright lights and had committed to playing the best support role that she could, focusing on what she felt was important. I completely didn’t see it until the very last moment, although I figured that the VP was probably not the Dark Ages traitor.
I kept thinking about Hilary Clinton when reading about Carolyn – someone the president completely trusted in all matters, knowing she could handle anything regardless of public perception. I don’t think that would have even popped into my head if Bill Clinton was not one of the authors.

4. Did you feel sympathy towards Augie and Nina? Would you have offered Augie a job?

I felt no sympathy towards Augie and Nina. Nina died early on so I didn’t really give her much thought. As for Augie, I was surprised that the president let him into his inner circle as quickly as he did, considering he didn’t really know anything about him. Blind trust? That sure seemed like a huge risk and I was waiting for it to backfire on him.

I’m a 100% yes on both of these, especially after I had finished the book. They were trying to do the right thing, and I had good feelings about them throughout. Bringing in an outsider like Augie would be a smart hire.

5. What did you make of the female assassin Bach?

The Bach character was all very odd. She showed up in America very early on in the book. It was made clear that she is a hard-core assassin who loves classical music. I was very intrigued by her and looked forward to seeing where her story would go. To my surprise it didn’t really go anywhere of interest. She rarely appeared and did not have much of a storyline. I feel like she was a missed opportunity because she had the potential to be one of the most interesting characters in this book!

She was probably my favorite character in the book. (The president’s secret service agent was a close second.) She seemed so good at what she did, and seemed to be always a step ahead of everyone. I liked her backstory. Being an expectant mother made her more human than your typical cold-blooded assassin.

This was my very first James Patterson so I was pretty excited to see what his books were like. I had not read the synopsis for this book in ages, so I was basically going in blind. Due to the title of this book I spent a good amount of time anticipating the president getting kidnapped. Eventually I realized that was not going to happen and had a good laugh about it!

I thought this book was good, but not great. I feel like there were a few missed opportunities, such as the lack of development of the character Bach. I also thought the president’s life-threatening illness was interesting and helped with the intensity of the book. Unfortunately that storyline fell away and no longer had the impact it did for the first half of the book.

Even though this book will not go down as one of my all-time favorites, I would have no hesitation picking up another Patterson in the future!

It was an easy read, and I constantly kept telling myself “One more chapter.” I really enjoyed the story.

We got to see Clinton and Patterson talk about the book at the Javits Center in New York City, and I was blown away by their writing process. They sent draft pages, written by hand, back and forth through the mail – I can’t imagine working like that in today’s technological age.

One last thing about Bill Clinton. There were some scenes involving the president (like the one with the homeless vet on the streets of DC) where I wondered is this how Clinton thinks a president should act, or is this how he views himself? I’m still not sure!

The One by John Marrs (April)