Today I am linking up with Vicki @ I’d Rather Be At The Beach who hosts a meme every Tuesday to share the First Chapter/First Paragraph or two of the book you are currently reading.

I’m also once again joining The Purple Booker with Teaser Tuesday. It’s easy to join – just grab your current read, open it to a random page, and share two teaser sentences being careful not to include any spoilers.

*I read this book last week and will be posting my review for it tomorrow.

They called him Moishe the Beadle, as if his entire life he had never had a surname. He was the jack-of-all-trades in a Hasidic house of prayer, a shtibl. The Jews of Sighet—the little town in Transylvania where I spent my childhood—were fond of him. He was poor and lived in utter penury. As a rule, our townspeople, while they did help the needy, did not particularly like them. Moishe the Beadle was the exception. He stayed out of people’s way. His presence bothered no one. He had mastered the art of rendering himself insignificant, invisible.

Behind me, someone said, sighing, “What do you expect? That’s war…”

The deportees were quickly forgotten. A few days after they left, it was rumored that they were in Galicia, working, and even that they were content with their fate. 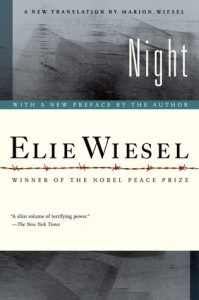 Born into a Jewish ghetto in Hungary, as a child, Elie Wiesel was sent to the Nazi concentration camps at Auschwitz and Buchenwald. This is his account of that atrocity: the ever-increasing horrors he endured, the loss of his family and his struggle to survive in a world that stripped him of humanity, dignity and faith. Describing in simple terms the tragic murder of a people from a survivor’s perspective, Night is among the most personal, intimate and poignant of all accounts of the Holocaust. A compelling consideration of the darkest side of human nature and the enduring power of hope, it remains one of the most important works of the twentieth century.

Do these entice you to want to read the book? What are you reading this week?
I’d love to read your First Chapter/First Paragraph and Teaser Tuesday if you’d like to link them in the comments below!